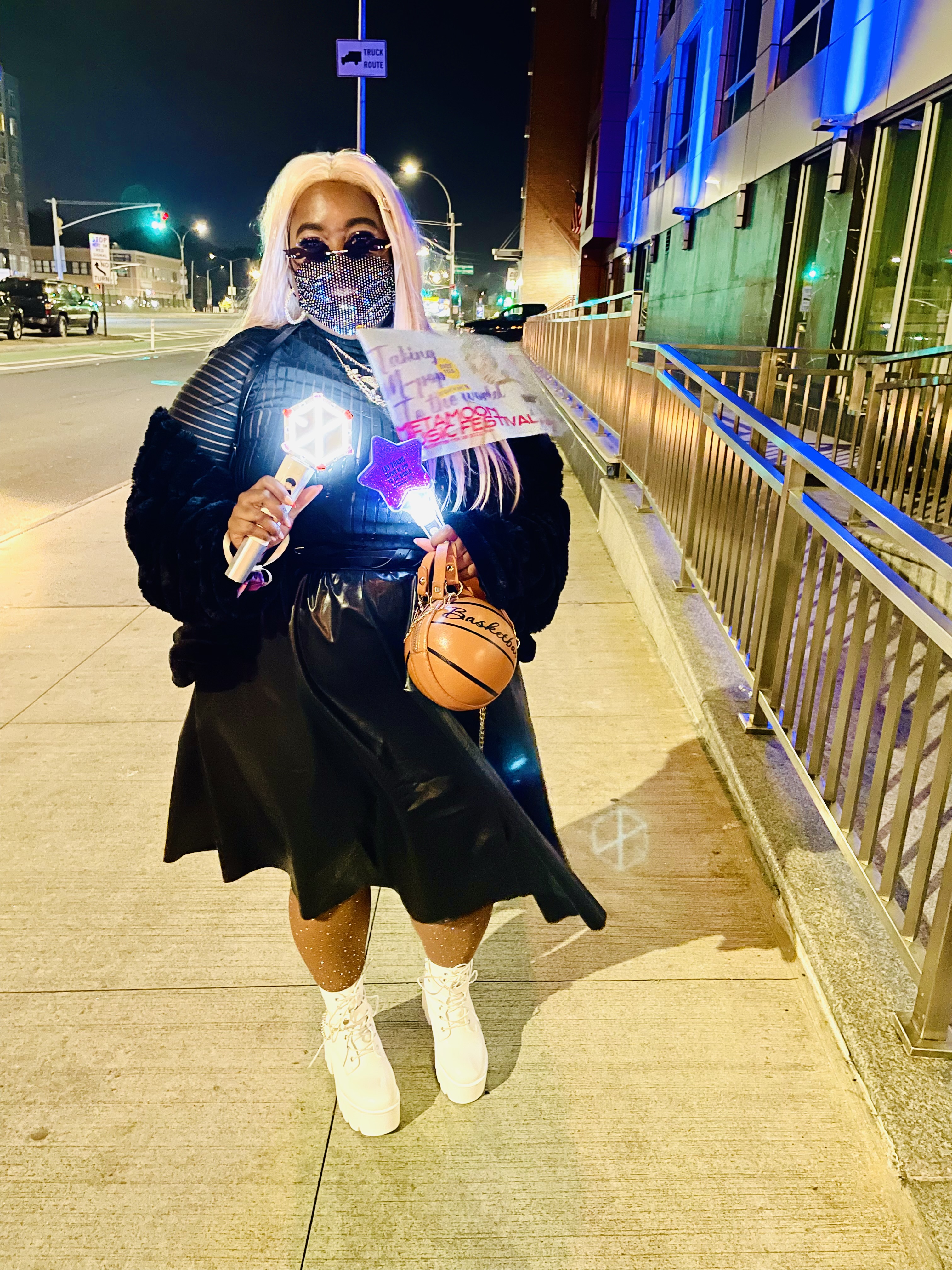 Years ago when first joining the K-Pop fandom, I introduced BibliothecEri Aqua to EXO and the rest was truly history. That is a story we’ve recounted time and time again every anniversary in December that we reflect further on the purpose of The Excogitative Librarium, your fan resource library. I can’t even explain how meaningful it still is to me to recount our first concert experience in 2016 as new fans (BibliothecEri Aqua and I arrived just as EXO began to perform “My Answer” [video credit: Clara] one of many first songs that captured our attention.) There’s something about the community found in the creative space of musicians that is so calming and freeing and exhilarating for me and I’m sure many a fellow music fan.

For EXO-Ls in particular, I know and have witnessed the same excitement, the same joy, the same calm whenever attending an event within our community. Whether for fan meeting, concert, music show performance, etc. You’re inspired to just walk up to someone holding an Eribong and introduce yourself, knowing you share a kinship almost immediately.

For some regions of the fandom, meetups outside of official group events throughout the years have fostered community bonds that have lasted and endured. Taking a look at what EXO-L Japan has been able to accomplish and all EXO Baidu Bars whether for the group or individual members has been an incredibly interesting study as compared to fan unions within other regions of the the international medium. International fans have existed and been present for EXO since their debut showcase so it is not necessarily a new phenomenon to see support for EXO outside of their home region.

Here in the USA there have been many organizations started throughout EXO’s career to support the members. It doesn’t go without saying that fandom culture is not foreign to the states outside of K-Pop. It is familiar in that you gather with like minded fans to celebrate and appreciate artists and their talents. But mix in that you are not just creating community among fans within your home country but also that the genre of music you are promoting carries with it and does not exist outside its cultural implications and influences. Think about Lay Zhang’s steady assimilation into the culture of Krump. It doesn’t exist outside of Black culture though all are welcome to bring their culture, their life experience and their all to add to the community. It’s easier to see by watching Street Dance of China (Namely Lay Zhang participating as Captain during Seasons 3 and 4.)

Fandom projects throughout the international EXO-L community reflect this fact. Though many international fans represent broad and unique cultural differences, we naturally assimilate and adapt to what fandom culture we see demonstrated by what we consider our home base fandom, South Korea, due to this being the birthplace of the group. This behavior is not special to EXO-Ls by any means or even just to K-Pop. In general many comparisons can potentially be found if one researches cultural art forms that reach and sustain an international audience. You come as you are and bring all of what makes you “you” to the community. And you come with heart open to expand and learn.

What I hope for in sharing my thoughts is to witness a shift towards greater community within our fandom. In the USA in particular, BibliothecEri Aqua and I had the pleasure to meet one of the admins of an organization dedicated to promoting and providing meetup events for fans to celebrate EXO member birthdays and special events within the NYC region. I am hopeful that while having seen many organizations in the USA come and go in the time that I have followed EXO, that this will be an organization that can be well supported and sustained. For EXO first and foremost, but for our community also and just as importantly.

Community provides a space for connection for fans both new and old, no matter the age, no matter the profession, no matter the race, no matter the gender and so on and so forth. Community can teach members about fandom expectations and guidelines on fandom business (voting, streaming, comeback season, meetups, café events and more.) It can provide a safe space to discuss thoughts and ideas for support to the benefit of EXO. For further example, consider the demonstration by Glorious Lay Union at the recent Metamoon Music Festival in distribution of support items for the event. It may seem of small significance to some but proved instrumental throughout the evening. The amount of people who approached me carrying a flag banner for Lay’s slogan “Taking M-Pop to the World” as well as my Eribong and star lightstick, asking where to find the items was poignant to me. The purple star light sticks were used throughout the evening to support the efforts of all artists who performed during the event culminating in a large demonstration in support for Lay Zhang as headline of the event, whom we all happily cheered for in unison. They worked together as a team to distribute items prior to the event, were organized in how items were distributed (a proof of ticket was required for items given on a first come first serve basis as fans waited in line,) and they gathered as one in the pit section with LED signs displayed, signaling that they were ready for the event to begin.

When you think of what coming together on a regular basis can do for a group of people, we should consider what efforts that will inspire in fans when it comes to future events. While this call for and desire expressed by this one admin for community may seem unnecessary when EXO has not regularly returned to the states following two concert tours (Exo’luxion in 2016 and Exo’rdium in 2017,) it shows in the lack of community in general within the region. It showed in particular to me when EXO promoted “Don’t Mess Up My Tempo” here in the USA in a way they’ve never done for an album before nor since. EXO albums were actually available for purchase in various stores throughout the USA that many fans like myself regularly shop in. A miracle! SM Entertainment even allowed for postcard distributions specific to the USA or South Korea market causing, in a meaningful way, a desire for our home base fandom to seek a way to communicate with the USA fandom. We did well in our sales; “Don’t Mess Up My Tempo” charted #23 on Billboard US 200 Chart, #1 on Billboard’s US Independent Albums Chart, #1 on Billboard’s US World Albums Chart. It is my opinion as evidenced by the extreme lack of promotion here in the States of EXO by SM Entertainment following that comeback, that our USA community somehow still failed to create the buzz needed to generate the returns we all desire: more EXO content for our USA community. That would include concert tours, television appearances, interviews on the radio, etc. Consider what you will about the subsequent efforts by members in their individual, sub-unit or special group activities to promote here in the States. Yes, we follow the efforts of SM Entertainment in the proper promotion of EXO at home and abroad but as a fandom who are the primary consumers, we are also able to lead.

Organizations in the past may have soured the pot when it comes to engagement with our region and our greater community at large. Truth be told, I have quietly wondered for quite some time whether the fiascos of EXOL USA Global have poisoned the desires of those in our community outside of the USA to work with any organization here in the States. I have wondered for quite some time why it is that organizations outside of the USA will promote members birthdays here in New York City in Times Square versus other areas of influence. Though sad to admit, it makes sense that organizations outside of the USA wouldn’t know where other opportunities for promotion were if there was not an organization to speak to to lead the effort. I have wondered for quite some time why there is not a worldwide union meeting space for fans whether new or old to speak and share ideas about ways to bring our fandom closer or promote EXO in general.

There is a natural order to our fandom, as stated before. It has been established primarily by the home base fandom in South Korea. The home base fandom were pioneers in the industry in many ways that have endured to today. Photo books, plushies, or celebrating member birthdays with Times Square ads are now things that are common place to many fandoms within K-Pop. And still EXO-Ls continue to set new expectations for the general K-Pop community. Traditions are what brings families together. Routines such as these bring comfort and familiarity.

But within our fandom, there is still a great need for community. A place to share your calm, your excitement and your joy.

We need a trustworthy fan union here in the USA. We need an organization that can bring the various cultures, lifestyles, and purposes of EXO-Ls together. We need events like those hosted by up and coming organizations to be consistent and well supported. We need enduring and lasting traditions that we implement for the building of our community and to the benefit of EXO. We need fans who have experience and history just as much as we need younger fans with passion and excitement about participating in the community. All can be welcome and benefit and contribute.

It’s as simple as stating, “Hi! I love EXO too!

This work is licensed under a Creative Commons Attribution-NonCommercial-ShareAlike 4.0 International License.